So I wanted to quickly give everyone a heads up regarding these spare propellers from Anbee. I really didn't need spare propellers but I thought the colored propellers would be a nice touch and having spares always is a good thing.

For starters, they look identical and quality seems to be there. Once I have attached them and re-calibrated the Tello Drone, it worked BUT it would have a hard time hovering still. It swayed, skipped and I really don't know how to describe it but something was off.

So I took them off, put them back on and still to no avail, they just "shook" in the air. So I went to inspect it further in comparison to the original propellers. What I noticed was that if you took hold of the tip of the propellers, they were a bit thinner than the original. Almost flimsy like. You can't tell from looking at it but you can get some considerable bend on these versus the original ones.

Like I said, you can fly with them but hovering wasn't as solid. I thought it just needed a bit of calibration but even doing so, it did not fix the problem.

When I put the original ones back on, it was rock solid at hovering.

Needless to say, I caution everyone when purchasing third party "stuff." Looks can be deceiving and that Minor minor flimsiness at the tip of the propellers definitely made a difference between night and day. I will see if i can post a video about this to help explain this better but hopefully everyone gets the point.

Oh one last thing, I just remembered, I did a couple flips with these and I'm assuming since the issue with what I just stated, it came crashing to the ground. Surprising at how such a little change, changes everything! Come to think of it, looking at the reviews on Amazon, apparently someone else experienced the same thing. Too bad.

Do I recommend them?

Probably not. They look good but if it shakes on hover, although you can fly with it, it's not quality. It's unfortunate because it's such a simple little thing. Although I don't expect much from "third party" products this affects the flight (hover).

Here is the link 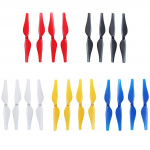 Yes, i also made a comment on Amazon about this problem. They look great with the different colors, but mine just will shut of, or just shoot up in the air with no control over the Tello. Replaced original props, and as you mentioned, flying rock solid again. Will just dump them in the bin, not worth it.
K

I purchased these and have flown all colors with no issue at all. The only thing is that they are tight to get on and off and it was hard for to make sure all were even but not too far down so the removal tool can still fit easily. I use the red to find it a bit easier. They are a little flimsier I am not going to lie I would never put them on my Phantom but for this bird they are fine. I calibrated IMU at the same time as install just for good measure not like it would help too much.
N

I will try the other colors to see if it's the same experience. I did only try the white ones so hopefully it's just that.
K

I installed some of these yesterday, and they are horrible. I had the red ones on first, and it seemed less stable (but I thought that might have been due to a bad crash), hence the need for new propellers. Reset the IMU, etc., but it was still a little wobbly. The blue ones were completely unflyable, and I literally thought I had somehow messed up the camera or sensors on the drone as it kept throwing vision positioning errors, and would fall to the ground like it was getting enough lift, or be completely unstable when it would fly (the height readings were really strange and off as well).

Saw this thread and put the yellow ones on and now I'm convinced the drone is okay, it's just the propellers, but I'm still in shock as to how big a difference they made to the stability of the drone.

will be ordering the official replacements now...
K

We are flying at 60' with no issue on the red ones. They are not as solid as the stock props for sure but they are holding shape. Maybe another set?

S
Change the Port of Tello EDU for Video Stream

Tello Discussions Jun 30, 2022
sarahbradley
S
N
hello everyone! i am stuck with swarming the normal tellos, how can i connect 3 drones to my pc, all of them have the same ip?

Tello Discussions Jul 7, 2022
Kallred
K
B
What to do in emergency situations