You are using an out of date browser. It may not display this or other websites correctly.
You should upgrade or use an alternative browser.

Another mi xiaomi mod. But not what you'd expect...

Yet to test fully but indoors it's a strong signal.

mounted on top and powered from the TELLO battery charger slot.
So it works by....
Phone to mi ----} modded mi to drone.
Last edited: Jan 26, 2019
Reactions: Flydrone, Skywalker and raulvolador
L

Bro, Interesting Mod!. Please share us a video about latency and test it!

Will do. Once I get a decent weather day here I will take it out.

I understood your are using TWO xiaomi extenders !

It's a very curious idea

Hurry up, go out and test it
Reactions: Customerx

Probably will get chance tomorrow. So here's hoping !!

It uses directional patch antennas. It'll work best straight up but once you move a few degrees laterally you'll lose too much db. But if you found a way to mount it on top or on bottom without much drag from the board you could then use it to extend the range. 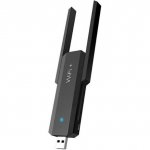 . It's a omnidirectional antenna based 2.4ghz wifi only extender. I don't know if it's compatible with the Tello smart switching wifi antennas, that's my only concern. That is the only thing I haven't been able to get out of Ryze support, is what WiFi extender technology is required to use with Tello.

It's well and truly mounted to the TELLO lol just hoping there is enough power to power the mi. Know it will reduce flight time pretty sure of that.

Yes they are in the feet but they face fwd of craft since the Tello was intended to be a "selfie" cam in more instances than others. I am in no way saying your idea won't work, just trying to reinforce already established theories on how wifi radio signals work.

Here is an example of what I'm trying to say, I did an experiment with my new phone a year ago then, I wondered how much great signal I could get during a speed test to my router, using the same "host server" I used Chrome's speed test easily searched in address bar. From my room it was descent. (One bedroom apartment) then I did 10 feet away, Mbps was increasing, then I did 5 feet, wow was I amazed how much better this new phone did compared to my old phone, then I did the test with the back of my phone up against the routers side, it's a upright internal antenna based router. Anyways my signal went way down, tried several times, not much better. Back up a couple feet and it's super fast again.

Wifi antennas have a negative zone, those that use 180 degree patch style antennas like mine. I know because I took mine apart at one point. Like a bubble.
Reactions: Customerx

What we all need to do is create or buy a can antenna that will work with the Tello, then the hard part of tracking the Tello using servos to pan and tilt the can antenna. This method would stabilize the signal and keep db up and allow more distance with greater control.

Yes this means a ground station setup but it's the only thing I see working the best.

Maybe track the ir sensors, could work???
Then again they'd be pointed down.

SleepyRobo said:
Wifi antennas have a negative zone, those that use 180 degree patch style antennas like mine. I know because I took mine apart at one point. Like a bubble.
Click to expand...

Can you explain this?

Maybe track the ir sensors, could work???
Then again they'd be pointed down.
Click to expand...

I was thinking adding a 3D GPS tracker and doing it that way.

Managed to try it out today, but in very windy conditions. Normally the park that I fly in is terrible for WiFi signals always losing connection, probably due to all the house and their WiFi. Hate the way the TELLO points down tho, couldn't fly too high because of the wind but here's a video, excuse my poor editing skills first time I've used this software!!

Will be doing a distance check asap!!

Thanks for sharing. It's a great job!
Reactions: Customerx
L

It seems to work fine! What about app's settings? Iframe and bitrate?Now i'm waiting distance test... Simple but good idea! Thanks for sharing

Will be using the TELLOfpv app next as it shows the dB. Will show the setup... As I left it on auto on the app. Will need to study up on iframe etc as I believe you mean the converter I used for the editor?? Is that right. Before uploading to YouTube.
X

Customerx said:
Will be using the TELLOfpv app next as it shows the dB. Will show the setup... As I left it on auto on the app. Will need to study up on iframe etc as I believe you mean the converter I used for the editor?? Is that right. Before uploading to YouTube.
Click to expand...

The Tello FPV app lets you select iFrame interval as well as bitrate. For long distance you would set to 1mbps bitrate and 1sec. interval. 0 second interval option will be in next release.

If you suggest the settings I will trust your knowledge and follow them for the examples. What would you suggest I use them as?

Pack a homebrew action-cam on top of Tello