You are using an out of date browser. It may not display this or other websites correctly.
You should upgrade or use an alternative browser.

What to do in emergency situations

Hello, I've had my first flight with my Tello that somewhat tested my drone's limits yesterday.

I lost wifi connection at 17.5 meters off the ground. Naturally I panicked and tried to run closer to the drone to reengage control over wifi. I didn't recall if I opened my iOS app settings or not to confirm it's still connected to the drone, memory was a little fuzzy for this moment

Looking up I saw VPS was probably not working and it began drifting away. It was later that day when I came home that I read the manual again and found the gem about it's failsafe protection of landing 50 seconds if lost contact. 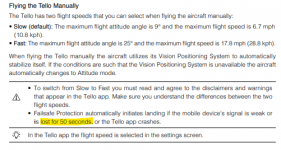 Anyway, I thought VPS was still going to work since I was flying over a basketball court outdoors (somewhat windy). So it was just me helplessly looking up praying it wouldn't drift to a neighbor's roof. Emergency stop and killing the engine is not an option for me on the TelloFPV app since it's way too high.

It started going lower and lower for some unknown reason to me at the time and suddenly flipped at 2-3 meters above ground and slammed on the basketball cemented floor upside down. 3 propellers flew out from the force and I spent a good 15 minutes in the hot sun scouring the grass and floor for propellers. It still turned on fine and flew as usual after. Thank god.


It then dawned on me that I'm probably missing some critical information from the manuals, so went back home to check out the manual.

Say what? So the youtube videos of users flying their tello at 30 meters, 20 meters are all flying completely manual on windless days?

Then there is this gem too : 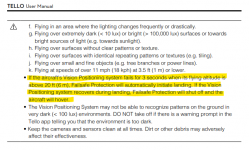 But how is that users can still fly their drones over water in some videos ?


So to clear and get more knowledge on what to do to save our drones from dying, we would need to react fast and do the right thing.

What could I do in situations when I lose my wifi connection to the drone and it was hovering/drifting over somewhere I can't recover if it crashed?

So far I've scoured the forums for the answer and found these :

Points gathered from other posts in this forum (credits to various members and especially VollaTello :
Absolute Limit : 22 km/h gust in 30 meters on tello forum, but I personally had issue at 17.5 meters (no wifi extender)

* Forget flying over water. If it works OK then it's pure luck, nothing else. The only thing to make it work consitently is to fly high enough over 100% flat calm water with lots of debris / dirt / plants. That way the water looks and behaves like a normal static bottom.

* The wind speeds are a bit optimistic. Don't forget that the wind at 30m altitude is MUCH stronger then at the surface.

* If Wifi is lost Tello will typically come down after 50s. If It also looses VPS (for example over a field of green gras) then it may drift, and start the autolanding sooner but the drift and autolanding is typically stopped once a clear bottom pattern is visible for the VPS camera.
Reactions: BlowMyTello
B

I guess the reason why there was excited discussions about (how fast it would take to restart wifi extenders) in the other thread was
because the only way to re establish connection to the tello when a wifi connection loss happens would be to turn on and off our wifi extenders and phone’s wifi connection, correct?

This would have to be within 50 seconds if it loses connection over some tree branches at the edge of a lake, then bye bye tello

Here in southeast asia tellos cost four to five times more so it’s much more painful to lose one.

But some extenders are quicker / more reliable to reconnect than others.
Reactions: BlowMyTello

J
Various problems: Drifting of drone in standby, "move to" not working, and video lagging